Every mariner, sailor and fisherman knows the Rigid Inflatable Boat, ubiquitous the world over in commercial, military, leisure and rescue operations. Their history as rescue craft begins nearly sixty years ago, in a bay in South Wales at UWC Atlantic, then Atlantic College an international sixth form college on the coast of the wild Bristol Channel. Today, over half a century later green shoots of something similar are returning.

Atlantic Pacific has its roots in responding to the 2011 Tsunami that devastated Japan. Former and current staff and students of UWC Atlantic coming together to provide an Inshore Rescue Boat for the decimated town of Kamaishi. The work to deliver this project opened the founders’ eyes to the problem of global drowning.

“Drowning is a serious and neglected public health threat claiming the lives of 372,000 people a year worldwide. This death toll is almost two thirds that of malnutrition and well over half that of malaria – but unlike these public health challenges, there are no broad prevention efforts that target drowning.” (World Health Organisation, Global Report on Drowning: Preventing a Leading Killer, 2014)

Atlantic Pacific exists to tackle this crisis and eliminate death by drowning by providing Lifeboats and trained crew to areas of need. 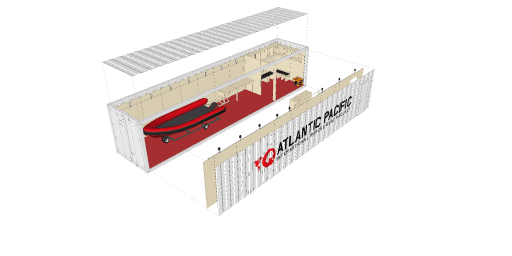 The Lifeboat provided to Kamaishi, Hahn 001 “Wales Go” was the first of a new class of IRB built at the College but can trace its heritage right back to the very first RIBs.  The first experimental RIBs built by the college were often donated to local sailing clubs as rescue boats. In 2013 a small, 3m long RIB was returned to the college, made of plywood and in a poor state of repair it was painstakingly restored by staff, students and ex-students of the college. A mould was taken from her wooden hull and the first new GRP boats built at the school for a number of years were produced.

To demonstrate how close to optimum the boat had been in 1969 Atlantic Pacific Founders Robin Jenkins, Lily Eckersley-Jones and Mich Creber, with help from staff and students of the college took the restored craft X-Alpha and her sister vessel Red Mist from the school to the De La Warr Pavilion in Sussex, by sea in the summer of 2013. This incredible trip demonstrated the capability of these little boats. 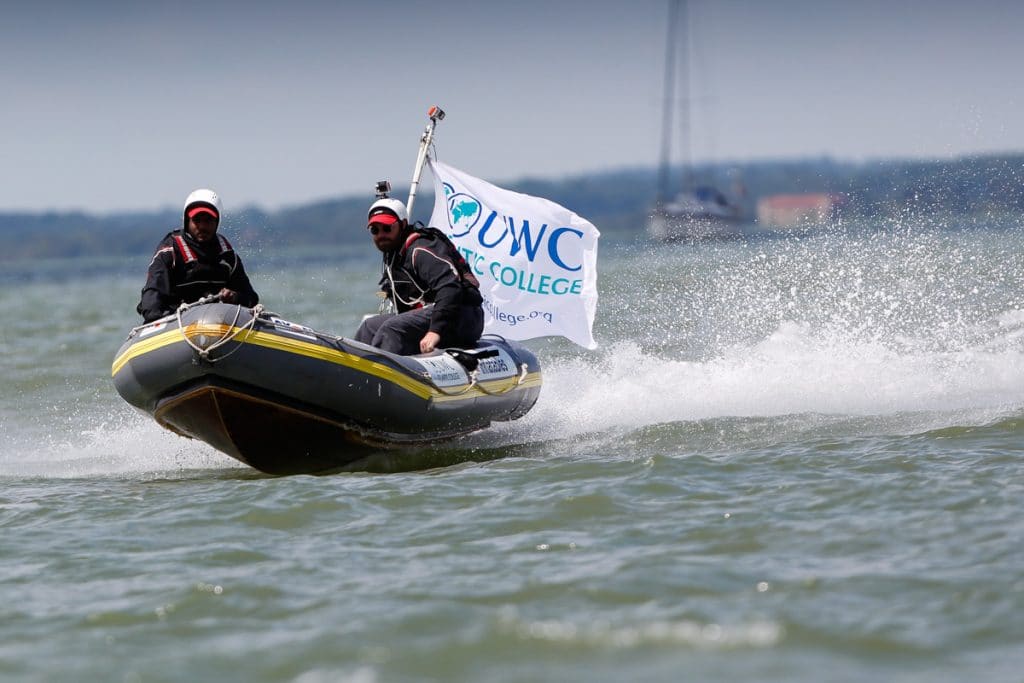 In order to meet the need in Kamaishi the original mould was stretched, adding a meter to the overall length and some 40cm to the beam. Done in an ad hoc way without calculations, drawings or precision the boat nonetheless worked well, completed sea trials and was ready to ship to Japan in 2014. The college students went on to produce a second of the class and a 3rd. 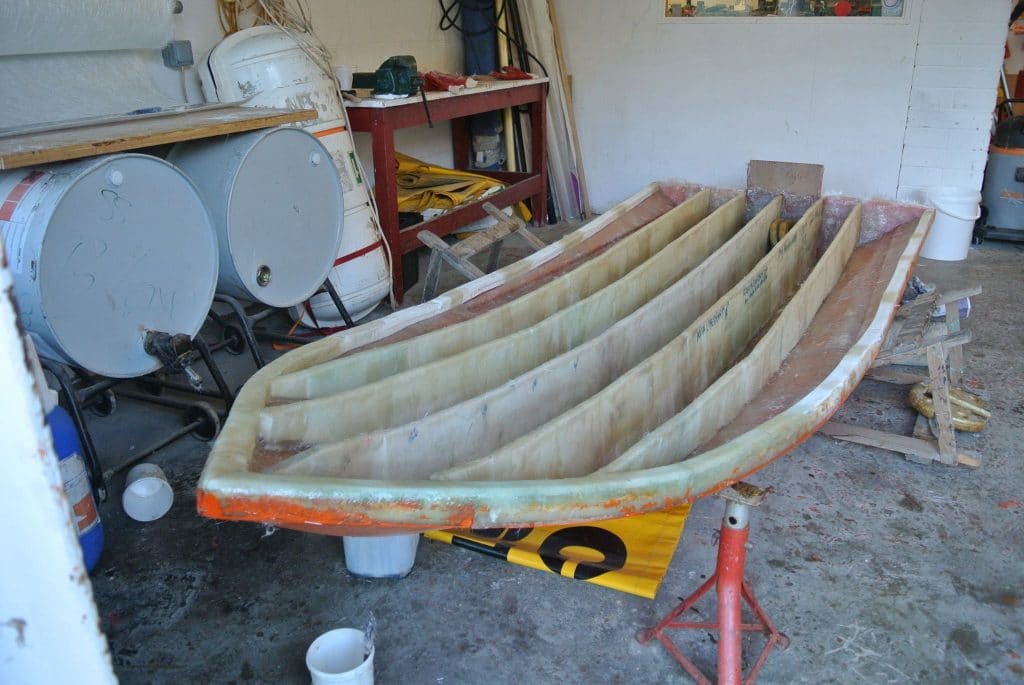 To transport and deploy the boat AP hit on the idea of developing a shipping container into a mobile lifeboat station, facilitating transport to Japan and also deployment on arrival. Wales Go was declared an operational SAR Asset in Kamaishi in 2016

Need for a new boat

While the Hahn class had filled the initial requirement it was far from optimised for the task in hand. The lack of design information made retrospective calculations, MCA coding, and assurance impossible. The low deadrise and inbuilt transom wedges gave a very low running trim reducing lateral stability and giving a harsh ride in waves. Human factors issues prevented operation by smaller slighter adults and the boat was not utilising the space envelope available in the LIB containerised station.  Lastly, the mould had not been built to production standards requiring large amounts of rework on the hull.

The opportunity, therefore, existed to start from scratch with a new, improved Hahn Class, Hahn Genesis.

The initial requirement was to develop a vessel that would:

Following these initial design idea a requirements capture exercise was undertaken. Atlantic Pacific crew with experience operating SAR vessels with the RNLI and humanitarian organisations in Greece, Malta and Italy were brough together in a virtual user group to develop user requirements.

To facilitate this standard SAR tasks were developed building on both Atlantic Pacific’s knowledge of humanitarian SAR and the work of naval architect Albert Nazarov (REF) who has developed a number of SAR craft for economically less developed regions.

Standardising SAR roles allowed the designers to clarify elements of the design and helped to structure conversations with users of differing skill and experience levels in communicating their needs.

This exhaustive list was pared down for an Inshore Rescue Craft, disregarding firefighting and considering a “fitted for but not with” approach elsewhere.

Our initial concept is for a 5.4m long RIB, giving a L/B ratio of 3, closer to modern planing vessels than the original Hahn class. High twist, with fine forward sections, give a load-carrying aft hull and a bow optimised for seakeeping with the aim being to allow sustained higher speeds and deliver the crew on scene more alert and less fatigued. Eliminating fixed transom wedges also increases running trim eliminating the lateral stability issues seen in early Hahns.

An open deck with tiller steering was chosen for a number of reasons. Experience with the College boats and on the Dela Warr trip showed it gave a good working layout on a small platform. This was backed up by experience in the Central Mediterranean and though comparisons between console driven versions of the Dutch KNRM’s Float Class Lifeboat. The open deck maximises casualty care space as well as space for carrying up to 10 survivors. The ability to carry

Key considerations for operating in less economically developed regions include: 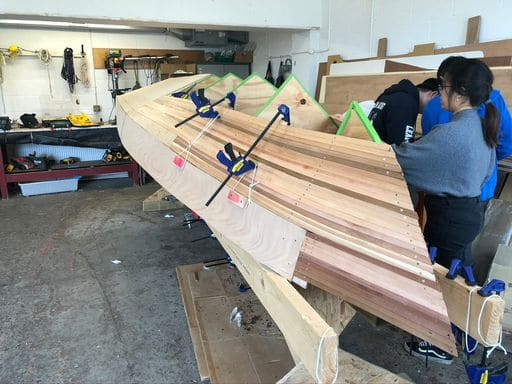 For the past year work has been ongoing on a wooden prototype/plug being constructed from strip planked cedar and marine ply at UWC Atlantic with students and AP Staff working together.

The wooden hull form will be finished off and faired by hand before being launched as a prototype for evaluation. This will allow full-scale fine-tuning of human factors/ergonomics and weights and centres before taking a mould for series production.

We believe in the importance of accessibility for all our crew and a full-scale demonstrator will allow optimisation of the vessel for over 90% of users, including those small or large of stature.

Atlantic Pacific aims to deliver sustainable containerised lifeboat stations to global drowning hotspots, our skilled instructors would then visit to train crew and instructors and support the development of a sustainable local service. The RNLI has always been supported by local stations, crewed by local people with each site very much in keeping with the local character and community. We believe we can emulate this worldwide to reduce global drowning and transfer skills, knowledge, and ownership of rescue assets with continued support AP.

Conceived and developed by students the patent for the RIB was donated to the RNLI  and has saved hundreds of thousands of lives. Born out of UWC Atlantic, Atlantic Pacific has brought this full circle, aiming to bring rescue boats to global waters inspired by these stories of ingenuity, selflessness, and community.