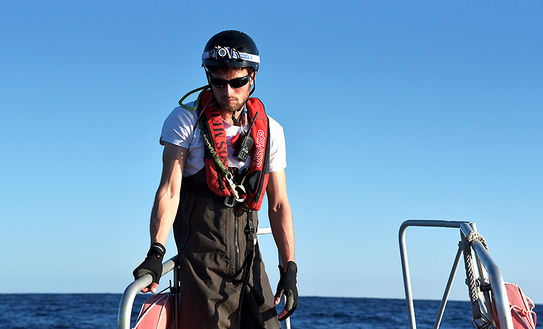 Max has now worked on numerous missions in the Aegean and Mediterranean seas. After getting in contact with Robin at Atlantic Pacific, Max planned to spend a couple of weeks working in Lesbos as a volunteer for anyone that would take him. During Easter 2016 Max joined Refugee Rescue as a helm on Mo Chara, their ex RNLI Atlantic 75 Lifeboat. During his time in Lesbos, Robin, Lily and Mary were all volunteering with Sea Watch working in the North of the Island, Mo Chara was based in the Capital, Mytilini in the South. During brief trips to Mytilini, the AP crew would meet and catch up on their experiences, Max’s stories were shocking and he had seen abuse and cruelty that had clearly moved him and altered his plans for the future. After his return to the UK, Max made some decisions that would change his entire life. Leaving a secure job, his flat and his social life, Max Joined Refugee Rescue again, this time as a Coordinator. With no security, so backup plan, Max offered his skills, his energy and his humanitarian nature to the well being of others that are in such desperate need. As things changed in the Aegean and the passage of refugees decreased, Max decided to use his skills and his experience on Aquarius, SOS Mediterrannee’s ship that is stationed almost permanently of the coast of Libya. Aquarius has been afloat and working with the refugee crisis right from the beginning and during it’s passage in the Southern Mediterranean it has been involved with the rescue of tens of thousands of refugees, Max has been involved with over 2000 rescues alone.

Max is on his third mission with SOS Mediterranee and is representing everything that Atlantic Pacific stands for.

So we can train more people to do what Max is doing we need your support. All donations are welcome, we will make the most of your support.. DONATE